Posted on February 10, 2014 by veldabrotherton

Valentine’s day is coming up and Arkansas Authors is having a big book giveaway for the event. I decided to give away one of my Ebooks which I haven’t mentioned in a long time. It was published by Dorchester Books about 12 years ago and is now available as an E book on Kindle. I consider it one of my best historical romances. 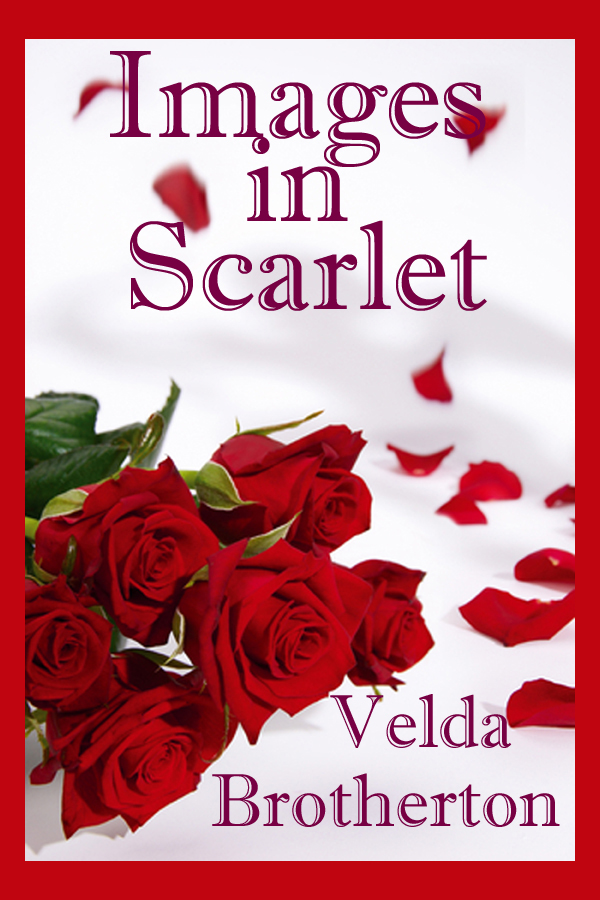 A search for memories reveals love

Images In Scarlet is about a woman photographer who loses everything in the Civil War, so she packs up her father’s ‘what’s it’ wagon, which he used to carry photography supplies while taking photos of battlefields and portraits of soldiers during the war. She leaves Missouri for a long trek to Santa Fe, New Mexico. Because it’s a romance, she of course meets up with Jake, a soldier recently released from Andersonville Prison, a hell hole many did not survive. With no memory of his past life, he searches in vain for clues to identify the woman in a small picture he carries. Here’s an excerpt:

Ringo nickered and started forward without urging. The mare answered and Allie could see that no one sat the saddle.

Something had happened to Jake!

At her urging Ringo broke into a trot, yet it seemed to take forever to reach Molly. Apprehension dried her mouth, the beat of her heart quickened, then nearly stopped when she dropped from the saddle and could find no sign of Jake.

A loud wahoo followed by a huge splash interrupted the tune, and she broke through the trees to see Jake playing in the water like a kid, shaking his head so that great drops flew out around him, forming miniature rainbows in the dying light.

She stumbled to the edge of the creek, shouted, “Damn you, Jake, you scared me half to death.”

He let out a joyful roar, high-stepped toward her. “Allie. Holy Hannah. I scared you? You just turned my hair gray. Don’t sneak up on a man like that. ‘Specially not when he’s bare ass deep in water. What are you doing here?”

“Looking for you. I was frantic… uh, worried that something had happened when you didn’t come back.”

Anger replaced her concern, and despite being fully clothed, she waded into the water to confront him. She slipped on the last step and caught at him to save herself from falling. Automatically he steadied her, and they were nearly toe to toe, him stark naked and grinning like a ‘possum.

Tiny rivulets poured from his dark hair that lay plastered over broad shoulders. Stricken speechless, she gazed at the water’s path down his bare chest, over the laddering of ribs and flat belly into the swirling torrent at his waist. The warmth of his breath caressed her cheeks, and neither moved.

Biting at her lip to steady its quavering, she managed to speak almost coherently. “Jake, I… God, I was so scared something had happened to you.” Tears came to her eyes, making her angry and embarrassed at the same time. She could no more stop them than she could force herself to move away from him.

Tendrils of ghostly mist rose into the cooling night air; she shivered and the heat off his body enticed her. A passionate need to love and be loved thrummed deep in her belly. She ached to touch Jake in all his secret, bare places. If she looked closely she might see every part of him, for the water was crystal clear. Instead, without moving her gaze from his smoky blue eyes, she rested one hand on his hip just beneath the stream’s surface.

The contact sent a bright sensation through her, and his eyes batted in surprise, turning even smokier. Desire blossomed between them, a palpable, writhing entity that couldn’t be denied.

Yes, folks, it’s a romance, but it’s much more than that, for the history of women in photography, of men in war, is well researched as is the historical stories of courageous women heading west in a time when women were little more than chattel to many men.

If you want a chance to win a copy of this Ebook, check it out at Arkansas Authors and sign up. If you don’t win you can always buy a copy for $2.99. Not a better bargain can be had.

Oh, by the way, check out my Twitter page @veldabrotherton. I’ve changed the background to reveal where I come from. Those are the Boston Mountains of the Arkansas Ozarks, and I live amid them in the White Rock Wildlife Management Area butted up against the Ozark National Forest. It’s one of the most breathtaking areas of the United States. Look deep into the photo, down in that valley to the right and you’ll see where I was born, on the kitchen table of a log cabin nearly inaccessible except by horse and wagon or a Model T pickup. The spot now hosts a picnic table above the shores of Lake Fort Smith in the state park by that name. The jonquils my mother planted 75 or more years ago still come up every spring. If you want to visit the park, have some fun and ride one of the boats that takes you out on the lake. You’ll hear them announce that they have many books by local author Velda Brotherton in the Visitor’s Center.