Posted on February 25, 2014 by veldabrotherton

I’ve signed a contract for my latest submission to Wild Rose Press, entitled Rowena’s Hellion, the second in The Victorian series about a group of Victorians from England and Scotland who settled in Victoria, Kansas in 1874.

The railroad town was founded by George Grant, who purchased 69,000 acres, paying $2 an acre to begin with, an average of 88-cents per acre in all. The Kansas Pacific railroad company had received from the government a 20 mile strip on either side of the tracks and were trying to attract settlers to live there in the hopes that settlement would create more customers for the railroad.

What was Grant thinking? Why would these staid and somewhat sophisticated Victorians want to settle in the wild west?

His main reason, of course, was that he had seen the countryside at its best. He described the air as champagne. Plenty of spring rains had produced a wide expanse of green, green grasses. A paradise for those locked into a countryside where no such land was available for purchase. In England the landed gentry owned it all. Any children born after the first son, did not stand to inherit land, and so he saw a perfect opportunity to sell minimum sized parcels to them.

He promised that if the company from which he made the purchase would build a place where colonists could live while homes were being built he would people the prairies with the best blood of England. A combination depot-store-post office-hotel to house no fewer than 25 persons as well as a siding and accommodations for handling and shipping their stock, all to be completed by June 1, 1873.

Free accommodations were offered in the Kansas Pacific Station Hotel until they might build temporary homes. He promised to provide at a reasonable price all lumber needed for temporary residences. Permanent residences were all to be of stone, the frame buildings being turned over to the hired help. There would be free schools, a church, a library and special train rates. He would keep a herd of high-blooded stock, cattle, horses and sheep, a supply of pure seeds, and steam cultivators such as were in use in England.

On April Fool’s day the first of the settlers, 30 English and Scottish citizens, began their

The way the Victorian women were perceived

journey to America and the prairies of Kansas. Many came from wealthy, aristocratic families. They had privileges far superior to most and all had some education while some were university graduates. They came to found big estates and to grow rich. Many came with the assurance that allowances varying from 50 to 200 dollars a month would be sent to them regularly. They were called remittance men. For the most part unmarried and in their early twenties.

Grant decreed that each person must buy 160 acres, but by 1873 he had amended that to read no one could buy less than one square mile with the exceptions of working men’s colonies which might hold collectively several thousand acres.

They brought with them woolen covers, silk top hats and dress suits, sets of books Scott, Dickens and Burns, all the best available hunting equipment. Women brought fine hand-spun linens and solid silver tableware with bone handles. They boarded the Alabama, the first steamship to set sail in 1873 from the harbor at Glasgow. The voyage would take a year from Glasgow to Kansas, utilizing not only the ship, but trains, river boats and stage coaches. Others would soon follow

So imagine these people blending in with the likes of settlers in nearby Hays City and Fort Hays, some of the wildest western locales at the time. However, Grant did not want them to blend in, but rather required that everyone would live as they had in England and not take up the western ways.

Why would they choose Grant’s plan over homesteading? Pride was utmost, but there were stipulations to homesteading land they found distasteful. They would not have been free to leave for extended visits abroad and would have been required to become American citizens.

The experiment lasted about ten years, before many Victorians returned to England, others remained and blended into the western civilization. Soon a colony of Germans sprung up and took over Victoria as they built their own city nearby, destroying the magnificent castles and Victorian homes. There is little left today of Grant’s magnificent experiment.

Wilda’s Outlaw tells the story of one of three women who journeyed to America to live with Lord Blair Prescott. One would become his wife, while he will retain guardianship over 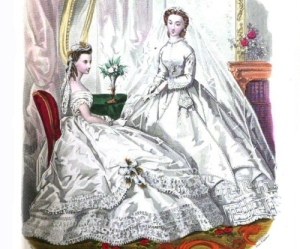 The dress Wilda would have worn

the other two until they marry. Wilda immediately balked at marrying his lordship and ran off with an outlaw.

Rowena’s Hellion is the story of Wilda’s sister, who is in love with his lordship, who suffers from PTSD after serving in the brutal Franco-Prussian war. Rowena sees beyond his sufferable actions due to that disorder, then known as soldier’s heart, and while others see him as a hellion, she knows his true nature.

The third in this series, working title Tyra’s Cowboy, is about the young Tyra, a cousin of Wilda and Rowena, who falls in love with a cowboy set on developing a new breed of beef cattle and building the largest ranch in Texas, coincidentally near Victoria, Texas. There this story of The Victorians will conclude.

For thirty years I've been a writer. Publication of my work began in 1994 . I'm pleased to have recently settled with Oghma Creative Media as my publisher. My brand is SexyDarkGritty and that applies to my western historical romances, mysteries, women's fiction and horror novels. I recently signed a contract to write westerns again, and what fun it's been working on the first one. If I weren't writing my life wouldn't be so exciting.
View all posts by veldabrotherton →
This entry was posted in The Victorians and tagged George Grant, Queen Victoria, railroad settlements, railroad towns, Rowena's Hellion, Velda Brotherton, Victoria KS, Wilda's Outlaw. Bookmark the permalink.

2 Responses to The Victorians Continue