Posted on February 18, 2016 by veldabrotherton

This is a wonderful story of the blending of cultures, something we in America know only too well. No matter what, we do it with great elan.

I received an email from my cousin this morning that her father passed away. At the age of 97, he was the last living Sasaki of my mother’s generation, my Uncle Cold-Outside. 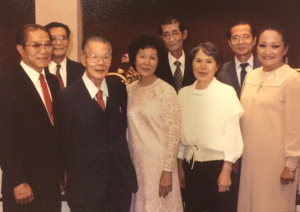 Uncle Cold Outside is second from the left.

Though I feel a huge sadness for my cousin’s loss and for the loss of a generation, I’d like to share a happy memory of my uncle–how he came to be “Uncle Cold-Outside.”

My mother was the youngest of nine Sasaki children. In fact, her next oldest brother was eight years older. From my earliest recollection, she told my four siblings and me that as the children of the youngest Sasaki child, we were not allowed to call our uncles by their Japanese names. She said it would be disrespectful. So, we called them by nicknames–like Uncle Fizzer–or “American” names, like Uncle Harvey. In fact, we called our mother’s oldest brother…