Posted on November 9, 2016 by veldabrotherton 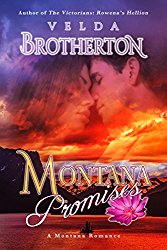 On a happy note, I have a fun, sexy, romp in Montana coming out in a six-part series, and I thought you might like to know about it. Read the first now, Montana Promises, and forget all the disturbing things that may be going on in your life. Or not. Back in the 1800s right after the Civil War people had a lot of troubles, but it was an exciting time as well.

Montana Promises begins with sadness and troubles when seventeen-year-old Tressie finds herself abandoned by a father following the gold rush and a mother who dies in childbirth. Imagine having to handle such a situation. But handle it she does and she and Reed, a Civil War soldier on the run help each other survive while walking across the high plains into Virginia City, Montana.

In Montana Treasures follow Tressie as she builds a life and cares for a baby whose mother dies birthing him. Reed has gone on his way trying to clear his name so he can return to the woman he has grown to love.

Every two months you can pick up a print or ebook copy of this series that will continue following other characters living and working in Virginia City. Here’s an excerpt from the first book to give you a taste.

Darkness had fallen to the ground, though the sky gleamed like silver around early sparkles of stars. She heard only the roar of a wild fury that blotted out the nasty burring of a rattler in her path. Quicker than lightning, Bannon hit her from one side, knocking her away as the diamondback struck. She landed hard, gasping to regain her breath. At first she had no idea what had happened, but on rising to a crouch saw Reed Bannon where he’d landed on hands and knees, facing down the snake.

I guess you’ll have to read the book to find out how they get out of this. But even when they do there’s more adventures to come.

I know you’ll enjoy traveling the high plains with my young couple. I’m so pleased to bring you this Montana series that will keep you guessing every step of the way.

Get the first in the series and preorder the second at Amazon. Here’s the ebook link, or order the print here as well. https://www.amazon.com/ebook/dp/B01M9C7J1U

Here’s number two in the series, Montana Treasures that will continue the story of Tressie and Reed. Pre Order it at Amazon now. I know you’ll enjoy this entire series.

For thirty years I've been a writer. Publication of my work began in 1994 . I'm pleased to have recently settled with Oghma Creative Media as my publisher. My brand is SexyDarkGritty and that applies to my western historical romances, mysteries, women's fiction and horror novels. I recently signed a contract to write westerns again, and what fun it's been working on the first one. If I weren't writing my life wouldn't be so exciting.
View all posts by veldabrotherton →
This entry was posted in Uncategorized, western historical romance and tagged gold rush, Montana, Velda Brotherton, Virginia City, western romance, western series. Bookmark the permalink.