Bobbi is 12 years old. My daughter brought her to me as a feral kitten, abandoned or lost from her mother. We could only guess at her age, but she barely had her eyes open. My daughter warned me that she might not bond with me but when she handed this tiny warm baby to me I held her over my heart and she lay there for a moment, mewling softly, then she crawled up around my neck and began to suck on my ear lobe.

I’m telling this story for several reasons, the most important is that two members of my writer’s group recently lost loved furry companions and it made me worry about what will happen to Bobbi if I pass on before she does. I’m 82 and tend to worry about things like that. My sweet daughter has five cats, I believe at last count. What if Bobbi can’t fit in with them should I go first? We discussed this fear at our group meeting Saturday and I said it would be best if she goes on before me even though I would grieve painfully.

Then today I sat in my living room and listened to a darling little bird who bounced around on the rail of my deck singing the most beautiful song. I laughed while I watched and enjoyed listening to her song. Surely she must know there is no danger for her here even though a large orange and yellow bob tailed cat often lies on that same deck.

So many people consider cats evil hunters, but this is not my Bobbi. She has never killed anything, has no interest in chasing mice, birds, or any other animal. I have no idea why, that’s just the way she is. I’ve seen it for myself. Once a small mouse got in my house and I think something might have been wrong with it, but it sat in the center of my dining room, tiny black eyes in a panic, but frozen in place. Bobbi came through, stopped, went over to this mouse and patted it on the back, then turned and strolled away as if it were beneath her to kill it. Often she lays in the yard while squirrels dart about teasing her, daring her to chase them and she has no interest. I swear this is true. She’s also smart. She has learned to open the screen doors from the inside and outside and comes and goes as she pleases during the summer months.

Another strange thing is we are convinced she is part bobcat. Her father passed through the area during the time when she would have been conceived and my husband got a good look at him. He was huge and definitely part bobcat, and a few months later a nest of kittens, several bob tailed, turned up in the wilds of our used-to-be farm. Ten acres located in the heart of the Arkansas Ozarks. Luckily for us our daughter was able to rescue one who is very smart and does not like cameras. There are other humorous stories about Bobbi, which I will share occasionally.

It’s been very difficult for me to get back to blogging after a full year of fighting health problems, doctor visits, tests and rehab stole time from what I wanted to do. Though I am so grateful to all those people who helped me. I don’t want to write about that. There is still much joy in my life that is well worth sharing, and so I thought I would begin my return to regular blogging by telling this one. I know there are many cat lovers out there, and also some who do not love them. Perhaps you’d like to share your cat stories, funny, strange, good, bad, and ugly.

Oh, here comes Bobbi to tell me it’s time to take a break. 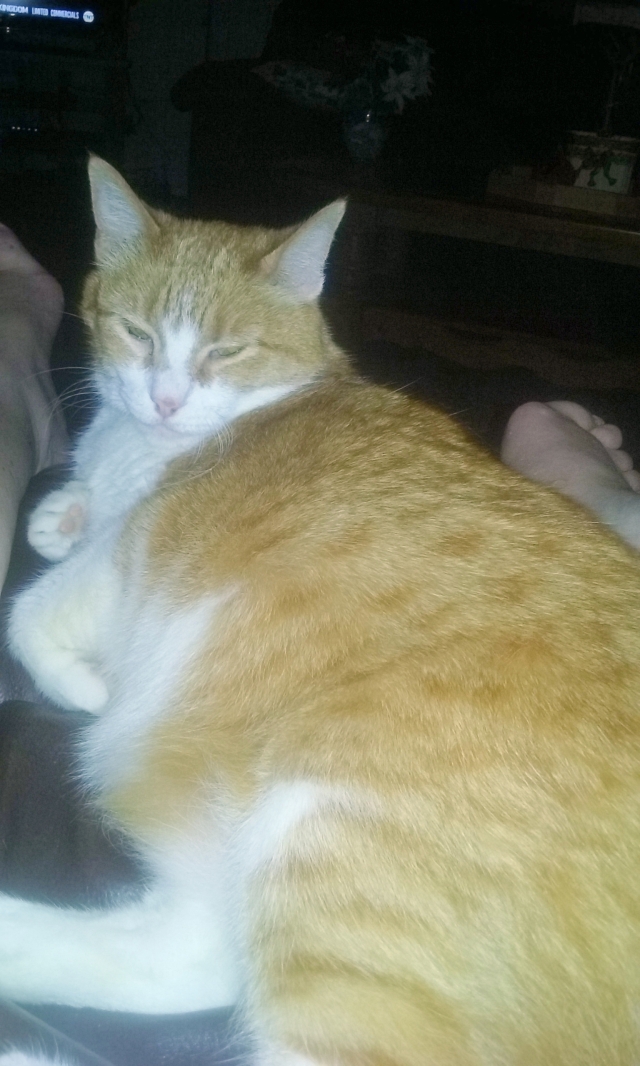 For thirty years I've been a writer. Publication of my work began in 1994 . I'm pleased to have recently settled with Oghma Creative Media as my publisher. My brand is SexyDarkGritty and that applies to my western historical romances, mysteries, women's fiction and horror novels. I recently signed a contract to write westerns again, and what fun it's been working on the first one. If I weren't writing my life wouldn't be so exciting.
View all posts by veldabrotherton →
This entry was posted in cats, Pets, Uncategorized and tagged cats, petowners hunters, Pets. Bookmark the permalink.

3 Responses to That Cat Won’t Hunt