This is the beginning of my six part Montana series, Promises begins the story of seventeen year old Tressie, alone in a soddie on the high plains after her mother dies in childbirth. Wounded, Reed Bannon flees the Union Army on a stolen horse that dies out from under him at her doorstep. Determined to find her father, who left to search for gold near Virginia City, Montana, Tressie nurses him back to health so he will take her with him when he leaves. And he will leave. But her need for revenge and his to clear his name tears them apart. The first of the series is available now

The second, Montana Treasures available on pre order, continues their story. Driven by a need for revenge against a father who abandoned his family, Tressie convinces Reed to take her to the gold fields of Alder Gulch in search of her father. Disguised as his younger brother, she cannot seem to let go of her hatred. Reed’s love holds them together.  Greed, violence, and passion rule those they meet in a west being ruled by the desire for gold. 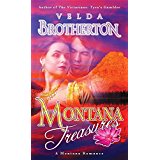 Will they discover that love will give them strength to endure the struggles they face so they can build a life together?

Tressie does her best to entice Reed into helping her escape.

“I’m dressed and so are you. No sense in you hurting.” Her heart pounded in her throat until she couldn’t speak. She wondered what it meant that she was willing to use her body to get her way with this man. Did that make her a soiled woman or just a survivor? The sounds of him rising from the floor quickened her pulse. With shaking fingers, she unbuttoned the front of her dress as he lowered his body to the edge of the shuck mattress.

He lifted one leg, then the other before lying back. She turned toward him and lay the flat of her palm on the taut muscles of his stomach. Reed sucked in a quick breath. After a while he put his hand over hers and she guided it to one bare breast.

The calloused fingers explored a nipple. She moaned and gazed into the reflections his eyes sent into hers. Those beautiful black eyes that revealed so much of his vulnerability. What strengths he might have possessed had been sapped away by his injury, but she could sense them like an underlying current felt but not seen. As he grew stronger would this man desert her, too?

She leaned forward and he licked at the nipple with the tip of his tongue. She shivered. Despite her well-laid plans to entrap this man, his first tender touches awoke a slumbering passion within her soul. Hard work and deprivation had disguised the woman growing inside her, and to deal with her awakening presented Tressie with a problem. She was about to enjoy what had started out to be a ploy to trick this man.

He licked his lips and tilted his head, studying her face closely in the firelight. With a quizzical look that defied understanding, he cupped her ear with one palm and raised to take her full lips to his. Tressie forgot her mission and melted into the warmth of his bare chest, a great joyful sigh bursting from her. She twisted both hands into his long hair and held on, her tongue meeting the probing of his, all warm and wet and delicious.

After the kiss he held her in silence, his breath a mist against her cheek. Oddly confused, speaking now of his earlier puzzlement, he said, “Tressie? I feel like we’ve been together before, but I can’t…Did we…?”

NOW AVAILABLE IN AUDIO AT AMAZON, AUDIBLE AND ITUNES

Tressie Majors is left alone in a soddie on the vast great plains after the death of her mother in childbirth.  Struck by gold fever her father abandoned his family and set out for the gold fields of Montana Territory. She wants only to find him and wreak vengeance.  As she buries her mother and the child, she sees a horse and rider approaching in the distance. Perhaps this is her way out.

Reed Bannon is a wanted man. Shot when he steals a horse from a Union officer, he rides west, his blood leaving a trail across the treeless plains. He flees the Battle of Prairie Grove and his connection to his mother’s people, the mighty Sioux. He seeks a future free from the prejudice against his Indian heritage and the violent acts he has been driven to commit.

Montana Promises is a western historical romance filled with passion, vengeance, loss and love. An epic adventure as vast and wild as the untamed land.