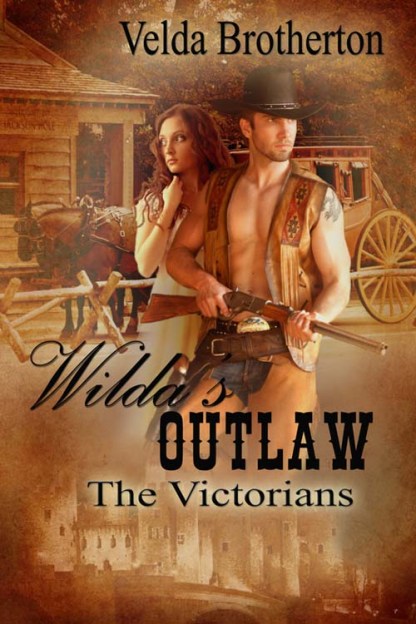 Rob a bank? Wilda is shocked to learn they want her help

Traveling for a year from Scotland to the American West the Victorians are robbed on the train before they reach Victoria, Kansas, the new English settlement. The handsome outlaw openly flirts with Wilda. When she realizes that the man she’s come to marry is not at all what she expected, in fact he’s boorish and rude, she sends a message with the help of her young cousin, to the outlaw. Please come.

Calder, who is  only an outlaw because it runs in the family, finally agrees to kidnap her to remove her from the circumstances of her agreement to marry Lord Prescott.  The chase is on. Wilda soon discovers that an outlaw gang is not the best place for a prim Victorian lady to land. But it’s too late, she and Calder are in love. Whatever will they do?

“Calder,” she murmured, and ran her hand up under his shirt along the laddering of his ribs. Soft down, warm skin, tight muscles aquiver under her touch. He replied in a language she did not know, but understood, breathed her name. She shifted enough to touch his mouth with hers once again, prolonging the taste of him. Honey and coffee and a masculine essence that she would have known anywhere, in any dark corner of the universe. Blindfolded, she could follow him across endless miles of prairie. If she kissed a hundred men, a thousand men, she would always know this one, above and beyond all the rest. For what remained of her life.
His arm tightened around her waist, the other hand cupped her buttocks to pull her even closer. A groan rumbled from deep in his throat. Under her cheek the rise and fall of his chest, the beat of his heart, the racing of blood through his veins. A rhythm, a haunting song needing no words.
His mouth covered hers in a gentle plea for more, his desire throbbing against her like a live, insistent, most secret thing. That she did not know how to quench his needs frightened and enthralled her. Passion washed over her until there was nothing else. Not her hopes or dreams, not her fears for Tyra and Rowena, nor her dread of all her tomorrows.
He uttered her name over and over. A mantra whispered against her skin, igniting yet another flame. Even as the repetition faded, she sensed his withdrawal, a stillness that coalesced into retreat. She could not let him go, would not, her fingers curled into the fabric of his shirt.
Though she desperately prayed for it, he did not try to kiss her again. Instead he put space between them, took long deep breaths and stared toward the horizon as if he sensed something about to appear there. After a long moment of silence, he pried her fingers loose. Uttered the words she had dreaded.

Loving a man damaged by war is a challenge, but Blair’s haunted eyes capture Rowena’s nurturing heart. She struggles to bring peace to this man who rides the Kansas prairie in the moonlight, wild to escape the demons who follow him from the battlefields.The woman haunts him as well, but he dare not follow his desires for fear he will hurt her. 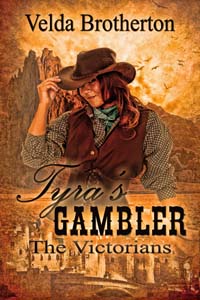 Tyra rejects her Victorian upbringing to ride wild on the Kansas plains, much like her idol Calamity Jane. Known as the wildest town in the west, Hays City attracts Tyra’s attention. Convinced she would make the ideal sheriff, she breaks up a fight, shoots poker player Zachariah in the leg and carts him off to jail. Later run-ins with the charismatic gambler shake her to the soles of her boots. He rides free with no ties, a life she desires. Where he goes, she will follow. Pursued by an unknown killer the lovers make a legendary journey across the western desert through the Valley of the Gun. Sanctuary in the mythical Altar of the Sun could save them or spell their doom.